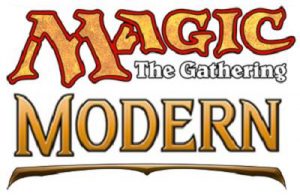 Magic: The Gathering formats are various ways in which the Magic: The Gathering collectable card game can be played. Each format provides rules for deck construction and gameplay, with many confining the pool of permitted cards to those released in a specified group of Magic card sets. The DCI, the governing body that oversees official Magic competitive play, categorizes its tournament formats into Constructed and Limited.

Constructed formats require decks to be made prior to participation, with players allowed to use any tournament-legal cards they possess. Sanctioned Constructed formats include Standard, Modern, Legacy, and Vintage. Limited formats, in contrast, utilize a restricted and unknown pool of cards, usually formed by opening Magic products. The limited competition requires players to select cards and build decks on the fly within the tournament itself. The primary two sanctioned Limited formats are Sealed Deck and Booster Draft.

A number of other formats have been designed by Wizards of the Coast or by players for custom gameplay or reduced investment cost; these are known as casual formats. Some casual formats utilize rules or sets of cards that differ from those used in sanctioned tournament play.

Modern is a constructed format created by Wizards of the Coast in the Spring of 2011 as a response to the increasing popularity of the Legacy format, which although popular proved difficult to access due to the high price of staple cards, as well as dissatisfaction with the Extended format of the time. Wizards of the Coast is unwilling to reprint some of these cards due to the Reserved List,[9] a list of cards Wizards promised never to reprint in order to protect card prices.Therefore, Modern was designed as a new format that would exclude all cards on the Reserved List, allowing the format to be more accessible than Legacy.

Modern allows cards from all core sets beginning with the 8th Edition core set and all expansions printed afterwards.The 8th Edition core set was when Magic cards began to be printed in modern card frames, and this is where the name for the format is derived.Wizards believed this cutoff would have the advantage of giving a visual cue as to which cards are legal in the Modern format.

The format maintains its own banned list.Cards are banned on the basis of their power level, as in all constructed formats outside Vintage.The first official tournament to be held using the format was Pro Tour Philadelphia in September 2011.The first Grand Prix to use the format was Grand Prix Lincoln in February 2012.